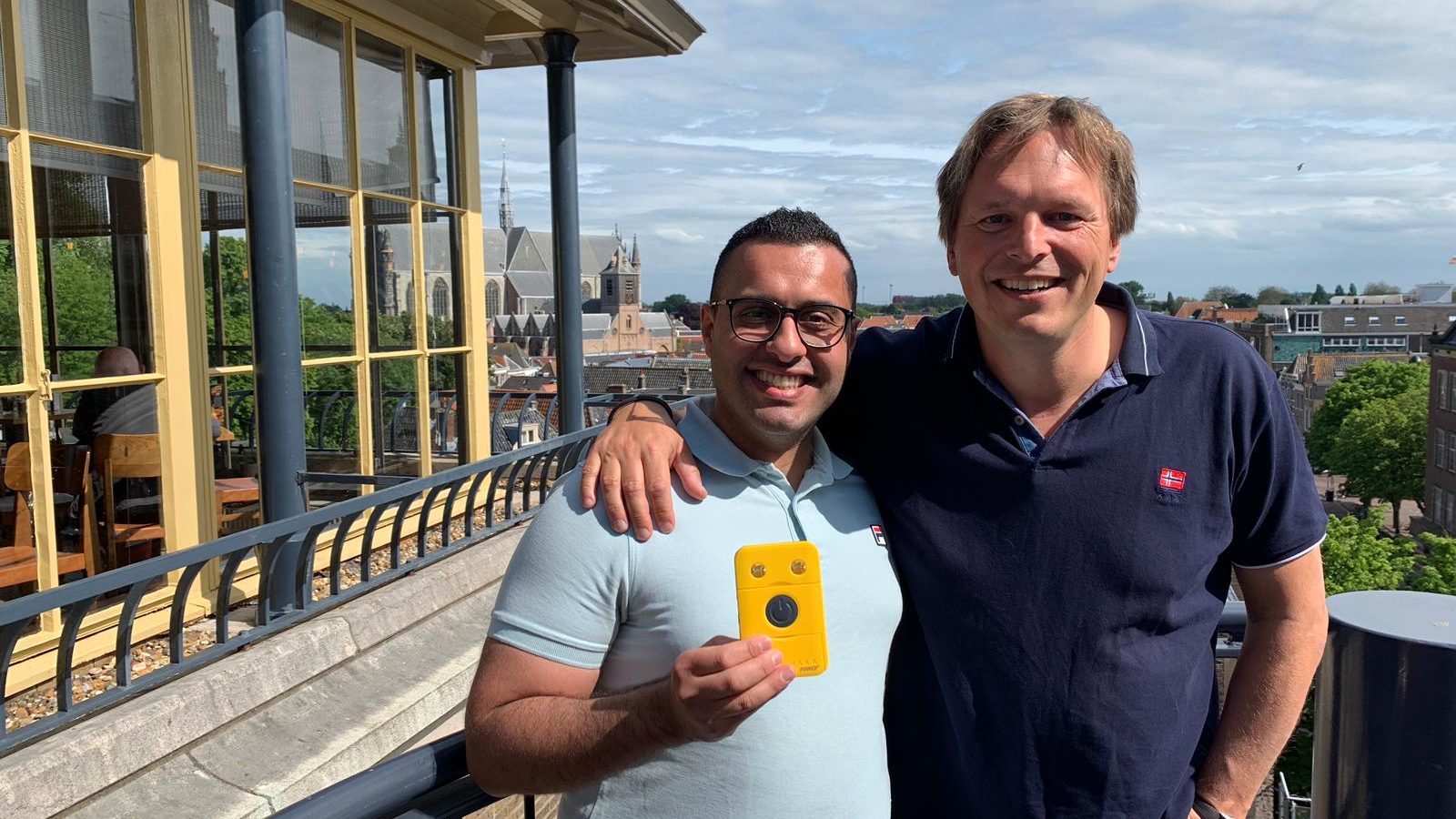 Haarlem, June 20, 2019 –  Today is World Refugee Day. To many people this is nothing more than a calendar alert, or a newspaper article with the latest statistics, but for more than 70 million people, World Refugee Day is in fact every day. Never before in recorded human history were so many people displaced, away from their homes, on the run from human-made conflict, or struck by natural disaster. In just 20 years time, the number of refugees has doubled, according to the most recent report issued by UNHCR, the refugee agency of the United Nations. The UN High Commissioner for Refugees Filipo Grandi is calling for doubling our efforts to help people who have lost everything.

Where do they come from?
70 million people is an incredible number. Neither France nor the UK have so many people. So where do they come from? You only need to open up a newspaper or watch the evening news to get an idea. A cyclone that hits Mozambique, Malawi, Zambia and Zimbabwe. The war in Yemen, the unrest in Venezuela, the ongoing conflict in Syria, though ISIS has been defeated, many cannot return to their homes in fear of the regime that’s still in power. Rohingya who fled to Bangladesh for ethnic violence in Myanmar, Uganda still has many refugees from conflicts in Sudan. People fled Afghanistan in fear of the Taliban. There are too many places around the world where is has become impossible or too dangerous for people to stay. Unfortunately, with #climatedisruption becoming an increasingly bigger problem, the challenge is only getting bigger each year. 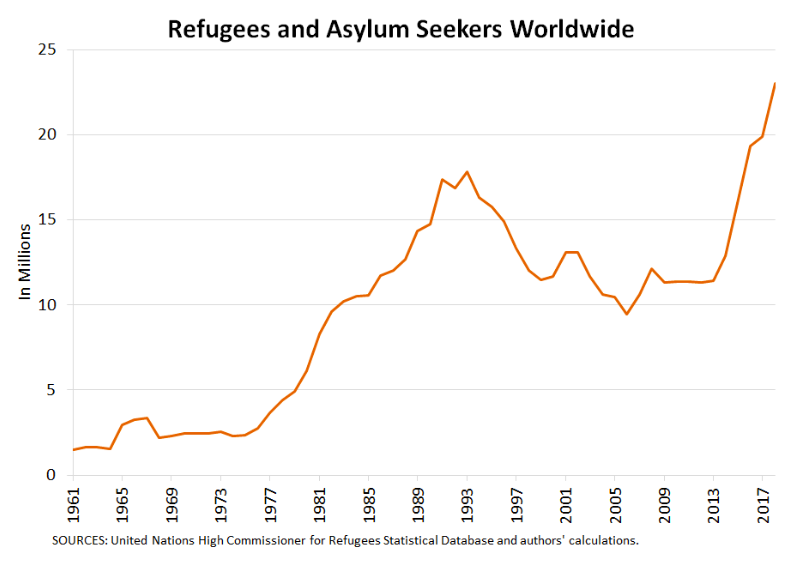 Where do they go?
Let’s answer this question statistically first. Turkey is hosting the most refugees by far, well over 3.5 million in total. But instead of looking at the absolute numbers, it may be worthwhile to look at it from a relative perspective as a percentage of the total population. For Turkey this means about 4.5% of the population consists of refugees. Compare this with Lebanon, which has received over 1 million refugees from Syria, this is almost 17% of the population. A big contrast is the US, who host a similar number but this is only 0.2% of the total population. Relatively speaking Germany hosts 8 times as many refugees at 1.6% of the population, slightly more than the Netherlands with app 1.3% who received more than 200,000 refugees in the past 10 years.

But the refugee crisis is not about statistics. It is about people. People like you and me. People who did not leave their homes and family behind voluntarily, but were forced to. Whether by nature or man, they choose for an uncertain future, which was seemingly better than the future they were heading towards or the reality they were living in. Every one of these 70 million people has a story to tell. And since refugees have found their way into most western countries, they are never far away.

Meet Ahmad Hamwi, a.k.a. “Mr. Leiden”
I had the pleasure and honor to interview Ahmad Hamwi, a refugee from Syria who has found a new home in the Netherlands, in Leiden. He is a marketing graduate from Aleppo University and left Syria 4 years ago when he was drafted for military service, but refused to serve under President Bashar Al-Assad. He and his wife fled the country, each going their own way trying to find a safe haven. Since Ahmad refused to join the military to fight for the regime, he can never return for as long as Assad is in power.

He gathered all of his money and first took a bus to Lebanon. But since Lebanon was overcrowded with refugees, he made his way into Turkey. There was no work for him there either. Ahmad decided to find a way to cross the Aegean Sea towards Lesbos. He got in touch with smugglers who basically offered him three choices, each at a different price level. 3rd class, the cheapest: you get on a boat but are likely to have to swim and a sudden death would be the result if you don’t make it. 2nd class, lower risk, but not certainties as to whether you’d make it or not. And of course 1st class, most people who take 1st class make it across, but a stiff price.

He had to travel up and down the coast of Turkey to find the right people to make it across to Lesbos and had to pay in advance. Should the Turkish navy catch them, than there’s no money-back guarantee. 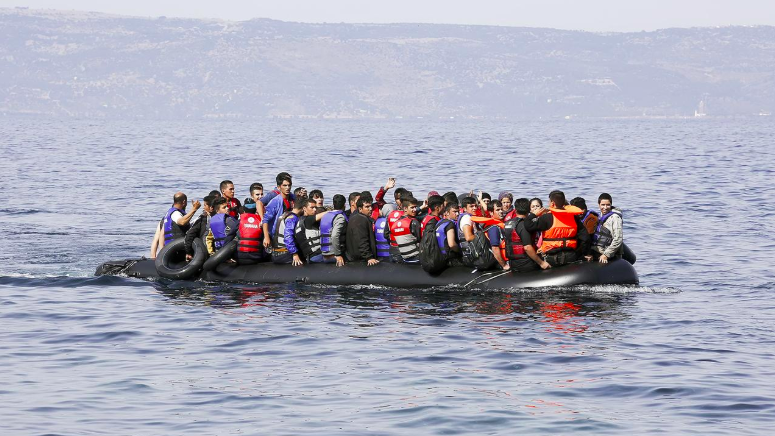 Ahmad only stayed in Lesbos for a few weeks after he was able to travel further into Europe. He had his eyes on the Netherlands, since he thought English was our native language and he had a good command of English. He walked across countries, got on busses wherever possible and where he was allowed to travel by bus and after many weeks finally made it to the Netherlands where he found out that the native language wasn’t English, but Dutch… Nevertheless, he applied for asylum. After his arrival he was able to bring his wife over, who made it out of Syria and into Egypt in the meantime. In the past few years Ahmad not only learned the Dutch language (I had a whole conversation with him in Dutch actually) but when he moved to the city of Leiden, he took it upon him to start promoting his newly found domicile through social networks under the alias of “Mr. Leiden”. Recently his life got even brighter when he and his wife got a baby, born in the Netherlands! Ahmad wants to contribute to society and is looking for a job as a marketeer, preferably with an advertising or PR firm. If you know anyone, do reach out to him through his FB page! He would love to hear from you.

WakaWaka and refugees
Imagine you have to leave everything behind, travel with the clothes on your body and a phone in your pocket. When you find your way to a refugee camp, you’ll be allocated to a tent. But at night, after the sun sets, it’s dark, very dark. Imagine what your evening would look like without having the luxury of a light switch? UNHCR and other refugee organizations do not have sufficient budget to enable them to donate solar lanterns to everyone who arrives. This is one of the reasons WakaWaka donates high efficiency solar lights to emergency relief organizations.

Over the past few years we have supported people who were struck by cyclones, tsunami’s and earthquakes in the Philippines, Mozambique, Malawi, Zambia, Zimbabwe, Nepal and Haiti among others and hundreds of thousands of refugees who had to flee from war zones in and around Syria. We can do this thanks to you, thanks to valued customers who buy our products, and thanks to companies who purchase WakaWaka’s for their staff or their customers. We are ever so grateful and humbled that we’re able to do this, but most gratitude is coming from people like Ahmad and many others like him. They had to leave everything behind and understand the importance of having light in the evening and staying connected while being on the run and want to stay in touch with family and loved ones. 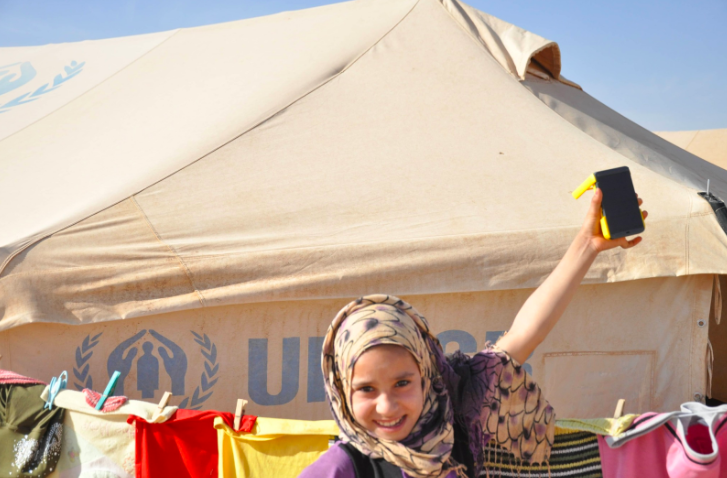 Gratitude
Especially today we want to express our sincere gratitude to all of you who have supported WakaWaka throughout the years and have allowed us to touch the lives of almost 1.5 million people, many of whom are part of those staggering refugee statistics. With every purchase you make, we can help people who currently live in darkness. Thanks for your continued support of our mission. Together we will reach millions more in the years to come!

Light up a life! #sharethesun