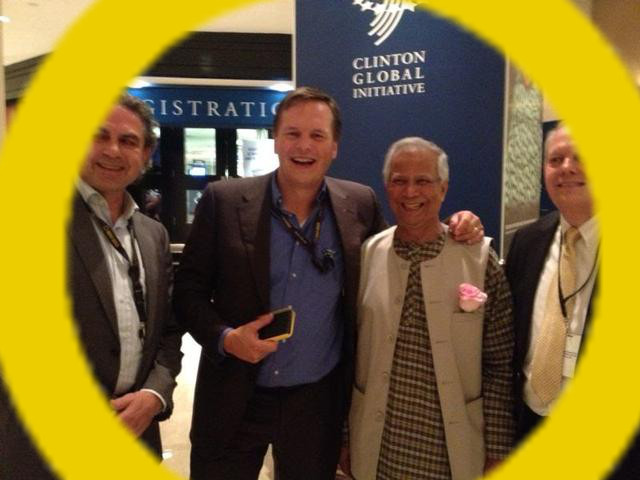 Established in 2005 by President Bill Clinton, the Clinton Global Initiative (CGI), an initiative of the Clinton Foundation,convenes global leaders to create and implement innovative solutions to the world’s most pressing challenges. CGI Annual Meetings have brought together more than 180 heads of state, 20 Nobel Prize laureates, and hundreds of leading CEOs, heads of foundations and NGOs, major philanthropists, and members of the media. To date, members of the CGI community have made more than 2,900 Commitments to Action, which have improved the lives of over 430 million people in more than 180 countries. When fully funded and implemented, these commitments will be valued at $103 billion.

In 2011, WakaWaka committed to distributing one million WakaWaka solar LED lamps to individuals in developing countries living in off-grid homes. So far, WakaWaka reached 50 percent of its commitment to impact one million lives before 2016. Among these are more than 200,000 Syrian refugees, 100,000+ survivors of Typhoon Haiyan in the Philippines and 60,000 Haitians who still live in shelters.

The Clinton Global Initiative (CGI) was established by President Bill Clinton in 2005. The CGI is an annual meeting held each September in New York city. Here global leaders come together to discuss and devise solutions for different pressing issues. The CGI has already improved the lives of more than 400 million people worldwide. This has been facilitated by more than 2300 commitments made by CGI members. This year’s theme is ‘Mobilizing for Impact’.

Now, two years later, Maurits Groen are back in New York City for the ninth CGI with a new concept and the newest product, the WakaWaka Power.

Meetings with the world’s top thinkers have been planned to address how to mobilize impact; focusing on involving the right people and resources needed to drive effective action on global challenges. Through a variety of sessions, leaders from across sectors will develop new ideas and partnerships, learn from their peers, and take action. Off-Grid Solutions will be presenting their newest business concept which is expected to launch in the spring of 2014.

For more information about how we mobilize impact, please view our impact map here. The map is being filled with new projects every week and already features over 50 projects in developing countries. It’s possible to view projects on a global, national and individual level, showing the exact location of where WakaWakas are being used, view photos or watch videos of who they are being used by, and read about how they are impacting lives every single day.

Members of the CGI are all influential global leaders from different countries. Amongst them are 150 heads of state, 20 Nobel Prize winners, and hundreds of CEO’s of companies, NGOs and foundations, members of the media and philanthropists. We are happy that three of our staff members are currently present at the Clinton Global Initiative!

The two founders of the WakaWaka story, Maurits Groen , and Michiel van Kleef (outreach and special projects) are representing WakaWaka and the WakaWaka Foundation. In the first days of the meeting they already met Muhammed Yunus, the inventor of microcredit; Donna Karan, fashion designer and founder of the Urban Zen Foundation; Brian Snyder, photographer for Reuters; Jeffrey D. Sachs, world-renowned professor of economics and leader in sustainable development; Jim Hansen, climate scientist and former director of NASA’s Goddard Institute of Space Studies, Jennifer Gilhool, global business leader and author; and Gail Romero, CEO of Collective Changes. Several manners of cooperation are being discussed.

If you want to follow the Clinton Global Initiative’s annual meetings, go to their website. Here you can read the News Highlights, watch short clips of the speeches and live sessions, read the CGI Blog, and more!

Of course we will keep you updated on the experiences of WakaWaka at CGI. Also we will give you news updates about the developments on the cooperation with our new CGI friends and partners!