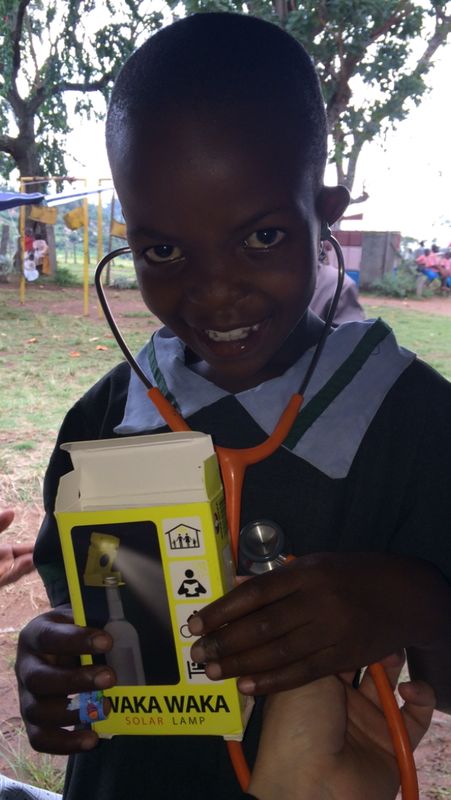 Esther will go there with Frank van Tunen and Nadine van Dijk, who lead the mission. They will go to Kenia with a small team consisting of four physicians, two nurses, one physiotherapist, one accountant and a teacher. Their goal is to perform a medical check on about 1400 children. The area is in the west of Kenya, near Lake Victoria. The team will visit different villages and areas in which they have been active since 2010. Therefore they can see the positive effects of their work and keep an eye on the children who were send to the hospital after previous missions.

What is such a check and why is it necessary? Esther’s team will work with the carrousel method. This means that they start with weighing the children to place them in a growth curve. Subsequently they check their blood by a small fingerstick in order to measure the iron. A lot of children suffer from malnutrition; they will go home with iron tablets or multivitamins. After the finger stick they always get a small present before they go to the physician for a comprehensive medical examination.

The physicians will treat the most infections; only when children are severely ill they will be brought to a hospital. Medical Checks for Children has raised money through a special fund for children who need a heart operation: the Emile Nieuwendijk Foundation.

Esther has already been in this part of Kenya with Medical Checks for Children in 2012. There she has seen how extremely poor the people are: they did not have access to sufficient nutrients, healthcare, clean water and electricity. This time she will combat energy poverty in the area as well. She will bring 100 WakaWaka Lights with her and divide them among the people in the region.

Who will get a WakaWaka and what will they do to fulfill the ‘free, but not for nothing principle’? Esther’s team needs translators to communicate with the children. The volunteers that will help them during their stay will receive a WakaWaka in return. The remaining WakaWaka lights will be distributed among the children. Esther will try to divide them among children who live in large families so that as much people as possible can profit from the WakaWaka light. These children will be asked to spread the knowledge they gained about nutrition and health to all their friends and family members.

Esther and her team leave on the 20th of March, if you would like to read more about her mission or contribute to the WakaWaka’s she will bring to Kenya please take a look at her website:  http://www.huisartsilpendam.nl/missie.html. For more information about Medical Checks for children visit http://en.medicalchecksforchildren.org/.   We wish Esther a good trip and are looking forward to hear how the WakaWakas were received!