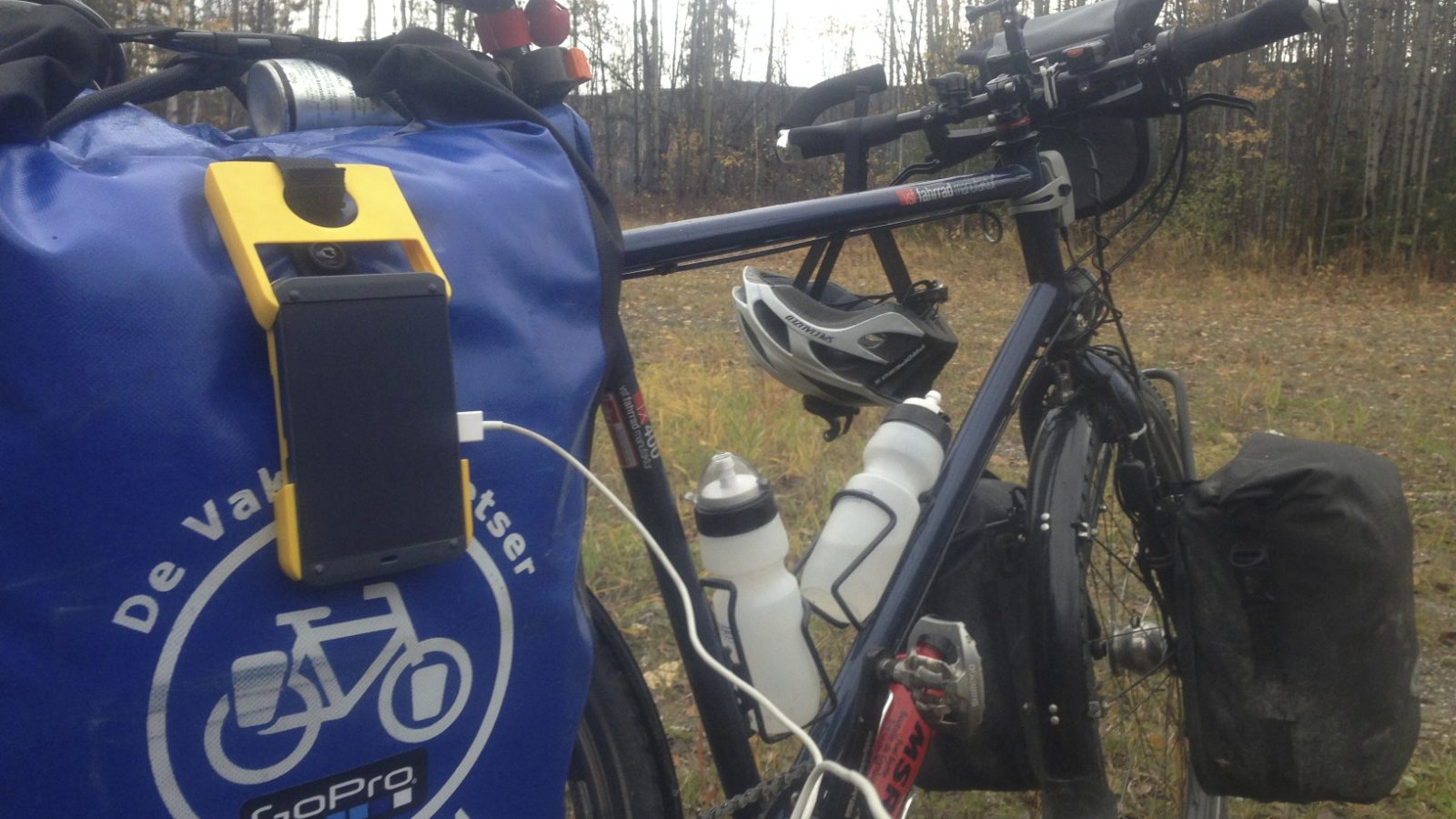 A Dutch Man and his Bike

Dirk is currently biking along the sunny coast in California but has come across tough terrain with extreme weather conditions. During this expedition of 18 months, the 99%RIDE team will raise awareness and inspire change by raising funds for philanthropic projects throughout Central and South America. You can follow his journey at www.99percentride.org. Read his experience and how he has been using his WakaWaka Power below:

“For now I have mainly used the WakaWaka Power to charge my phone, however, it’s very handy using it as a flashlight, too! This has saved me on at least one occasion, on one of the worst days I have had so far…”

“It was in Canada, on the 7th October, 2013. The ride was from Muncho Lake, BC, Canada to Summit Lake, Stone Mountain. Distance; about 110km. It was cold and windy and I was having a rough day, it was the 11th consecutive day of cycling and the weather wasn’t getting any better.”

“Around 3pm I passed a small gas station with a restaurant, this was in Toad River. There was guy there who was asking me what I was doing (“are you out of your mind?”) and where I was going to stay that night. My reply was to find a nice spot along the road and pitch the tent up. He gave me some advice and told me to keep cycling to Summit Lake on Stone Mountain, “There’s a nice campground there and another service station so you can warm up and have a good evening.” This was another 40km. Looking at my watch I hesitated, it would get dark pretty soon and I never like cycling in the dark. Not when you know that there’s more wildlife out there than humans. And wildlife is lively at night. But the thought of a campground with service station sounded good, and I decided to get pedaling. Not knowing that this would be one of the worst days of cycling so far…”

“Once I was on the road the weather turned from bad to worse. The wind had picked up and it had started to rain a bit. It was also getting darker and I had start the climb up to Summit Lake, the top of Stone Mountain. A 6km climb with a winding road was leading me to the top, 1300m elevation and also the highest part of the entire Alaska Highway. My legs were burning, toes freezing, my hands were getting colder and rain was turning into snow which was now falling horizontally because of the strong winds. But there was something to look forward to, a nice place to camp, a restaurant, a bar and above all, some warmth. At least, that’s what I thought…”

“I reached the summit and looked around. A deserted campground, an abandoned service station with a couple of buildings completely trashed. Not a soul in sight. Great, now what? Look for a place to pitch the tent, or keep cycling? Too hungry and tired I made the decision to pitch the tent. Not the easiest task when it’s pitch black and you’re in the middle of a snowstorm…

“Luckily I had my WakaWaka to help me out! I tied it around a piece string and put it around my neck. I wore it as necklace, it was shining bright enough to see what I was doing. Setting up the tent took a bit longer than usual, I was looking for a spot to keep out the cold wind, if it was possible at all… The LED in the WakaWaka is so bright it illuminates enough surface to see where I’m going and what I’m doing. After 20 minutes of fumbling around I had finally set up the tent. Quickly getting inside, rolling out my sleeping bag and getting some rest. The next day would be a heavy one.”

“What surprises me is that the WakaWaka is so strong and reliable. I’ve used it for over 7000km now, in pouring rain, snow and sunshine, and it still works like it’s supposed to. Keep in mind it is hanging on the side of my pannier all day long, every single day. The battery time is amazing and I know that if I need to use it as a flashlight it will always work.”