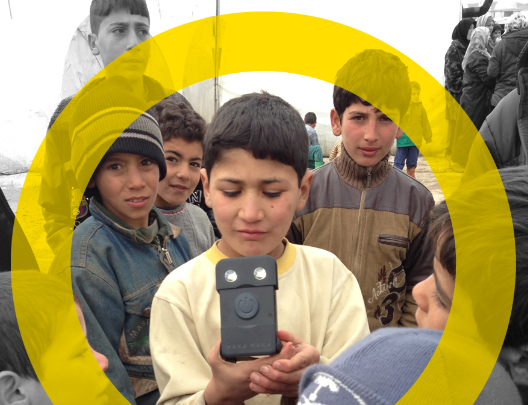 Hundreds of thousands of families have been uprooted. Refugee camps give them a place to stay, but circumstances are substandard and basic needs unavailable. Syrian Refugees families that left their homes and belongings behind, now lack clean drinking water, medical care and sanitary facilities. Because of the lack of electricity, proper lighting is scarce. The camps depend on kerosene lamps, which give poor light, evaporate toxic fumes and are highly flammable and thus very dangerous. Apart from that, kerosene is scarce and expensive. Accidents with these lamps results in thousands of burn injuries, mainly among children. Not the speak about the women and children that inhale their smoke, an equivalent up to two cigarette packs per day. Distribution of the WakaWaka Power’s will ensure that at least part of the refugees have access to free and safe lighting. It has been found that replacing kerosene lamps with off-grid solar lighting eliminates burn risks and increases school grades as well as income generating capacity. Because the Power can charge mobile phones, it also gives families a chance to stay in touch with next of kin.

We had to fast-track produce these Powers for Syrian refugees but recently these units landed in the South of Turkey and have by now finally found their way to 5.000 Syrian families, providing light and power, keeping them safe, enabling them to read and charge their mobile phones.

During the month of April WakaWaka ran a Buy One, Give One campaign. People pre-ordering a WakaWaka Power for themselves were also giving one to Syrian refugees. This has resulted in an additional 700 Powers that will soon be headed for the refugee camps.